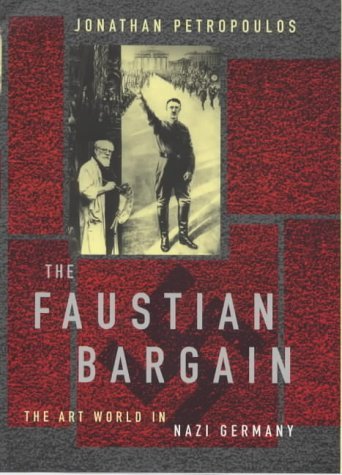 This high-minded ethos concealed a more mundane and recognisable urge: greed. The Nazis rapacious Aryanisation needed the complicity of experts from the art world, who, in the land of Goethe, appropriately sold their souls for power and privilege. Twenty such Faustians are considered by Jonathan Petropoulos, author of Art as Politics in the Third Reich, in his richly detailed and timely account of the period, The Faustian Bargain: The Art World in Nazi Germany. Petropoulos considers individuals representing different facets of Art in 1930s Germany: museum directors such as Ernest Buchner and Hans Posse, art dealers (a traditionally Jewish profession), journalists, historians such as arch plunderer Kajetan Muuml-hlmann, and artists themselves.

His restraint from polemic or moral hyperbole is admirable and necessary, preferring instead to show the murkiness of the water that could contain such self-serving sharks. The picture is complicated by a wider Germanic idea of cultural supremacy--and the punitive terms of the Treaty of Versailles--but while there is scant evidence that those featured were directly responsible for death or deportation (and on occasion they may even have helped individuals escape persecution), there can be no denying their role as cogs in the slick machinery of the Third Reich, and as such they are morally, and criminally, culpable.

On the last point, Petropoulos is damning on the failures of post-war denazification, which allowed many of those tainted to rehabilitate careers and continue to profit from their contacts and reputations, however besmirched. As the closing words of this quietly shocking account spell out: The art experts of the Third Reich largely avoided punishment while they were alive- it is therefore imperative that they not be exonerated by history.

Comments
Comments for "The Faustian Bargain: The Art World In Nazi Germany":