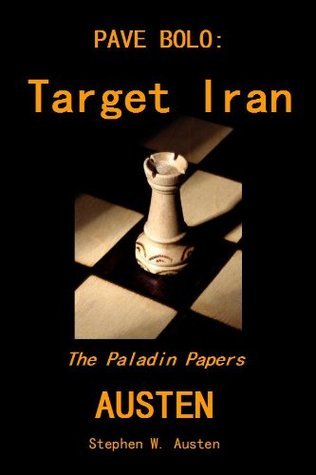 Resisting calls to halt their nuclear programs, a crushing cyber-strike against the United States is planned. It’s time for PALADIN and his Onyx Ops team to derail Iran’s nuclear ambitions. They unleash one unique weapons system tracing its legacy to the Cold War and another taken from the pages of tomorrows science fiction in a single, decisive masterstroke.“PAVE BOLO: Stuxnet Strike” is the fifth story in “The Paladin Papers” military techno-thriller series.

It is also a thought-provoking prequel to its companion story “411: Cybergeddon”.Some characters and locations are fictionalized, but the central themes, methods and means are all anchored in fact. The others:“411: Cybergeddon” - it is April 11 - “411” - in the near future. Iranian agents launch brutal cyber attacks whose impacts eclipse “911“. PALADIN and his Onyx Ops team must track down the perpetrators and deliver swift justice. The story moves from Dubai and Venezuela to the United States.

Scenarios in the story mirror actual industrial mishaps and SCADA-related security failures. It is also a cautionary tale about just how fragile our society truly is.“BENT SPEAR: Missing Missiles Over America”, six nuclear-tipped cruise missiles “appear” unplanned and unannounced at Barksdale Air Force Base in September, 2007. Red faces clash with Air Force blue in an aftermath rocking the nuclear community. Since twelve cruise missiles actually left Minot AFB, how could six of them disappear enroute.

Why? It ends with a twist you’ll enjoy, plus an alternate ending, equally thought-provoking.“ONYX OPS: The Global Grab For Global Resources” - Masters of black ops ruthlessly navigate today’s globalization. From World War II, to the Cuban Revolution and the Kennedy assassination, through the CIA’s Operation Phoenix and the oil fields of Vietnam. It leads to today’s Afghanistan. Must-read, fast-paced fiction with high-impact insights into the geopolitics of global resources.

You will think about this long after you put it down.TACIT ALUMNI: Tracking Terror” - in a world of Global Jihad, it is September 11, 2011, the tenth anniversary of 9/11. From downtown Washington DC to Area 51 to Somalia and the Gulf of Aden, “PALADIN” and his high-tech Onyx Ops team commemorate this tragic event in their own special way. Follow the masters of global black operations at Onyx Ops as they orchestrate new technologies in the relentless hunt for terrorists.This is an excursion into the near future of Radio Frequency IDentification (RFID) technology and the possibilities it raises.

We justifiably fret over the “asymmetric attacks” from our adversaries. We sometimes forget that we have the technological means at our fingertips to leverage some “asymmetric attacks” of our own.I hope youll enjoy reading these as much as I did in writing them.Thank you!Stephen W. Austen