Against the Odds: Health & Hope in South Africa: The story of Medical Education for South African Blacks (MESAB Herb Kaiser 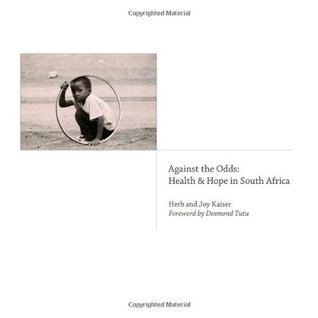 A collaborative effort by Americans and South Africans, MESAB supported the training of black South Africans in the health professions, with the aim of helping to reverse the dire consequences of South Africas apartheid policies. At the time of MESABs founding, apartheid dictated separate health facilities for blacks, which were underfunded, underequipped, and understaffed by contrast to the lavish facilities provided to whites. Inferior health care for blacks resulted in high infant and child mortality, shorter life expectancy, and the prevalence of TB and other preventable diseases that had long since been eliminated in the white population.

And in a population of over 20 million blacks, there were fewer than 350 black doctors. Over the course of two decades, MESAB helped some 10,000 blacks become health professionals or enhance their skills. It also promoted palliative care training of caregivers for the millions of black South Africans stricken by the HIV/AIDS pandemic sweeping South Africa.

Written by MESAB’s founders, Herb and Joy Kaiser, the book does not shirk from recounting the structural and management problems that kept MESAB from achieving its full potential, carefully weighing its successes against its failures. Their account may help illuminate the practical path that other idealists are pursuing at the same time as showing that however hard the struggle you can make a lasting difference.

Comments
Comments for "Against the Odds: Health & Hope in South Africa: The story of Medical Education for South African Blacks (MESAB":