In Search of Passion Michelle McGriff 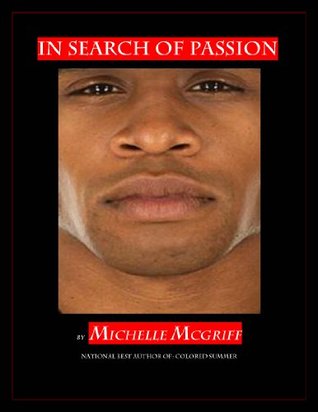 Having a life where everything you need is at your fingertips what isn’t his brought to you can get old after a while. This was how Pashon Llovere felt anyway. From his safe and secure life on a chateau on a hill in Languedoc-Roussillon France, Pashon only dreamed of seeing the world. But instead most of the world was brought to him. Masters in all fields were brought to him to train him in art, sports, and music all of which, by the age of twenty-five—he’d mastered.Pashon’s life was not planned out so carefully for nothing.

You see, upon the death of his father King Ahmad Abindani the Prince Island in the Mediterranean near Africa, Pashon was to take his rightful place as heir to this kingdom. He was to return there with his wife and daughter and rule this island as did his grandfather.

Along with him also would come all the wealth of his father who had accepted his mother as a gift from the King in order to bear a son and had for many years supported Pashon’s upbringing financially. Finally, the time came for Pashon to leave France with all of his inheritance. Before heading to the Island his father and mother had business to tend to in New York. Pashon was to finally see a bit of the world and the life he only lived in by name, for the first time.Jealous of all this, his half sister Camila watched, schemed and planned for ways to get rid of this younger troublemaker.

She felt he’d stolen her life—as well as the love of her father. Pashon was nothing but an interloper in her world. This trip to New York was to be her coming out adventure. He had everything that was rightfully hers.…and so, she set about a plan to get it all back.Author Notes: In the feel of many of your favorite fairy tales, In Search of Passion is a fun loving carefree read. Not designed for close scrutiny and deep researching for details, Author Michelle McGriff stretches her literary license to bring readers something uniquely, and refreshingly entertaining.

Comments
Comments for "In Search of Passion":